Tuesday Poem: "Phoning my sister at the nursing home" by Peter Cooley

“Welcome to Diane’s Consolidated Miseries.
Diane is unavailable to take your call
but if you would like to leave a message just recall
the pitch and timbre and volume of her hostility.
Your call is important to us. If you want a tirade
against her father and mother, ninety-one and ninety-three,
press one; against her brother and his family,
press two; against the ‘entire goddamn world,’
press three; against the men who left her,
press four; against her body she’s shrunk to eighty-six
pounds, press five. The other five numbers
are screams, execrations, a witch’s Sabbath hex
against you. Remember, phoning her, you asked for it.
The machine took down your number. She’ll call you back.” 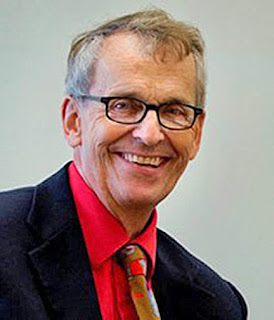 For more information about the poet, Peter Cooley, see:
https://www.poetryfoundation.org/poets/peter-cooley
Posted by Ben Hur at 00:01 No comments:

He arose early, the morning tinged with excitement,
eager to be at his desk. He had toast and eggs, cigarettes
and coffee, musing all the while on the work ahead, the hard
path through the forest. The wind blew clouds across
the sky, rattling the leaves that remained on the branches
outside his window. Another few days for them and they'd
be gone, those leaves. There was a poem there, maybe;
he'd have to give it some thought. He went to
his desk, hesitated for a long moment, and then made
what proved to be the most important decision
he'd make all day, something his entire flawed life
had prepared him for. He pushed aside the folder of poems-
one poem in particular still held him in its grip after
a restless night's sleep. (But, really, what's one more, or
less? So what? The work would keep for a while yet,
wouldn't it?) He had the whole wide day opening before him.
Better to clear his decks first. He'd deal with a few items
of business, even some family matters he'd let go far
too long. So he got cracking. He worked hard all day-love
and hate getting into it, a little compassion (very little), some
fellow-feeling, even despair and joy.
There were occasional flashes of anger rising, then
subsiding, as he wrote letters, saying "yes" or "no" or "it
depends" -explaining why, or why not, to people out there
at the margin of his life or people he'd never seen and never
would see. Did they matter? Did they give a damn?
Some did. He took some calls too, and made some others, which
in turn created the need to make a few more. So-and-so, being
unable to talk now, promised to call back next day.
Toward evening, worn out and clearly (but mistakenly, of course)
feeling he'd done something resembling an honest day's work,
he stopped to take inventory and note the couple of
phone calls he'd have to make next morning if
he wanted to stay abreast of things, if he didn't want to
write still more letters, which he didn't. By now,
it occurred to him, he was sick of all business, but he went on
in this fashion, finishing one last letter that should have been
answered weeks ago. Then he looked up. It was nearly dark outside.
The wind had laid. And the trees-they were still now, nearly
stripped of their leaves. But, finally, his desk was clear,
if he didn't count that folder of poems he was
uneasy to look at. He put the folder in a drawer, out
of sight. That was a good place for it, it was safe there and
he'd know just where to go lay his hands on it when he
felt like it. Tomorrow! He'd done everything he could do
today. There were still those few calls he'd have to make,
and he forgot who was supposed to call him, and there were a
few notes he was required to send due to a few of the calls,
but he had it made now, didn't he? He was out of the woods.
He could call today a day. He'd done what he had to do.
What his duty told him he should do. He'd fulfilled his sense of
obligation and hadn't disappointed anybody.

But at that moment, sitting there in front of his tidy desk,
he was vaguely nagged by the memory of a poem he'd wanted
to write that morning, and there was that other poem
he hadn't gotten back to either.

So there it is. Nothing much else needs be said, really. What
can be said for a man who chooses to blab on the phone
all day, or else write stupid letters
while he lets his poems go unattended and uncared for, abandoned-
or worse, unattempted. This man doesn't deserve poems
and they shouldn't be given to him in any form.
His poems, should he ever produce any more,
ought to be eaten by mice. 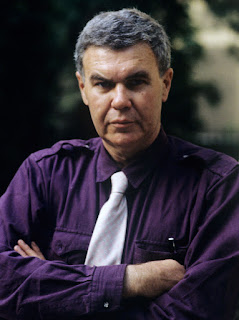 For more information about poet, Raymond Carver, see:
https://www.poetryfoundation.org/poets/raymond-carver
Posted by Ben Hur at 00:01 No comments:

He is somewhere else, he is mountains away
but even if he were near he would never
make an audience.

The American eagle never says he will serve
if drafted, will dutifully serve etc. He is
not at our service.

He does not know the meaning of magnificent.
Perhaps we do not altogether either
who cannot touch him. 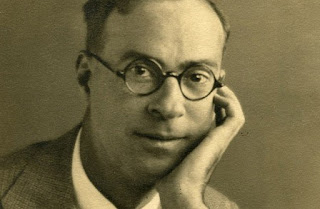 For more information about the poet, Robert Francis, see:
https://www.poetryfoundation.org/poets/robert-francis
Posted by Ben Hur at 00:01 No comments:

You have no enemies, you say?
Alas! my friend, the boast is poor;
He who has mingled in the fray
Of duty, that the brave endure,
Must have made foes! If you have none,
Small is the work that you have done.
You’ve hit no traitor on the hip,
You’ve dashed no cup from perjured lip,
You’ve never turned the wrong to right,
You’ve been a coward in the fight. 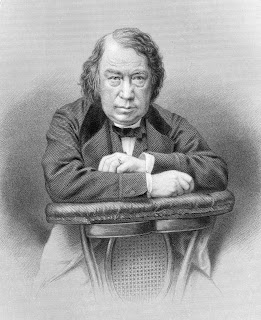 For more information about the poet, Charles Mackay, see:
https://en.wikipedia.org/wiki/Charles_Mackay_(author)
Posted by Ben Hur at 00:01 No comments:

When William Blake came fashionably late
to parties he’d blame it on archangels,
prophecies broadcast between the leaves
of ordinary trees in the orchard:
those who restrain desire do so because
theirs is weak enough to be restrained…
As in Martinsville, Wisconsin, when we
allowed Mike Meinholz to get in the car,
surely a mistake, since the wheels would start
churning up the twelve-packs of Budweiser
he never restrained himself from drinking.
We all have our excuses for wanting
to avoid conversation with mortals,
to restrain ourselves from the fools we are
in the neon light that only darkens
with beer, fears we can never quite drown.
One hundred people trapped in one small town
with just one bar, one church, and one butcher.
Expect poison from standing water,
bewildering Blake would probably say,
if he’d been around to help drag the drunk
from my Impala, down our steep driveway,
to the back lawn where he would sleep, where we
stood that night without the assistance
of good sense, grass, or Romantic verse,
and heard, I swear, a voice come from below
where the woods dropped into the gulley:
a woman in pain, we thought at first,
which nearly made us run the other way,
but then it shrieked like a snared rabbit,
or was it some keening itch branches scratched,
or nothing but a dull thud in the chest,
nothing but what we wanted it to be, then,
some housecat that couldn’t find its way down,
some worried awe that barely held us up,
some trembling thing in a tree we couldn’t see. 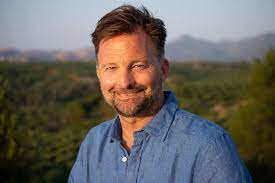 For more information on poet, Christopher Bakken, see:
https://en.wikipedia.org/wiki/Christopher_Bakken
Posted by Ben Hur at 00:01 No comments:

You thought you could ride a bicycle
but, turns out, those weren’t bikes
they were extremely bony horses. And that wasn’t
a meal you cooked, that was a microwaved
hockey puck. And that wasn’t a book that was
a taco stuffed with daisies. What if
you thought you could tie your laces?
But all this time you were just wrapping
a whole roll of sellotape round your shoe and
hoping for the best? And that piece of paper
you thought was your tax return?
A crayon drawing of a cat. And your best friend
is actually a scarecrow you stole from a field
and carted away in a wheelbarrow.
Your mobile phone is a strip of bark
with numbers scratched into it.
Thousands of people have had to replace
their doors, at much expense, after you
battered theirs to bits with a hammer
believing that was the correct way
to enter a room. You’ve been pouring pints
over your head. Playing card games with a pack
of stones. Everyone’s been so confused
by you: opening a bottle of wine with a cutlass,
lying on the floor of buses, talking to
babies in a terrifyingly loud voice.
All the while nodding to yourself like
‘Yeah, this is how it’s done.’
Planting daffodils in a bucket of milk. 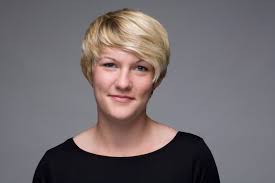 In my humble opinion, one of the great songs in the Canon of Unrequited Love Rock'n'Roll songs.

I hope that you are weathering Aotearoa's National Lockdown - the Sequel well.
Posted by Ben Hur at 09:22 No comments: