I was here before you and after
the Big Heat
I will be here after you.
While you have lived,
I have struggled to live.
Some of you have been my guardians,
some have been my enemies,
but your ferocious machines will fall silent
and the insects will return.
Even my enemies will ride the sky again
as the smudges of your smoke
are wiped clear to blue.
Your footprints will wash away
and your domination become a folk tale,
ghost stories told to frighten our children.
We have kept the faith
and, through the ages,
our stories have kept our hopes alive.

In our Dreaming,
you vanish
and Gondwana is once more.

To celebrate the release of the Paperback Edition, I hope you'll forgive me if I run the title poem again. 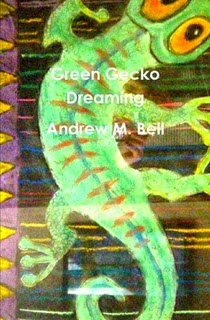 The cover is a partial representation, turned 90 degrees, of a chalk drawing that my oldest son, Thomas, drew when he was eleven years old.


The darkness lifts, imagine, in your lifetime.
There you are - cased in clean bark you drift
through weaving rushes, fields flooded with cotton.
You are free. The river films with lilies,
shrubs appear, shoots thicken into palm. And now
all fear gives way: the light
looks after you, you feel the waves' goodwill
as arms widen over the water; Love

the key is turned. Extend yourself -
it is the Nile, the sun is shining,
everywhere you turn is luck.

This is a beautiful poem, rich in its simplicity and yet awash with imagery of light and water. It can be interpreted in a number of ways, but I imagine it as the final journey, like an ancient Egyptian, the "you" is floated off down the Nile, with all the troubles of life washed away in the embrace of a peaceful death.

I love that image: "The river films with lilies" and how the "you" of the poem feels "the waves' goodwill". Beautifully economic and, paradoxically, expansive.

Tuesday Poem: "The Dormouse and the Doctor" by A. A. Milne

A Doctor came hurrying round, and he said:
"Tut-tut, I am sorry to find you in bed.
Just say 'Ninety-nine', while I look at your chest...
Don't you find that chrysanthemums answer the best?"

The Dormouse looked round at the view and replied
(When he'd said "Ninety-nine") that he'd tried and he'd tried,
And much the most answering things that he knew
Were geraniums (red) and delphiniums (blue).

The Doctor stood frowning and shaking his head,
And he took up his shiny silk hat as he said:
"What the patient requires is a change," and he went
To see some chrysanthemum people in Kent.

The Doctor came back and, to show what he meant,
He had brought some chrysanthemum cuttings from Kent.
"Now these," he remarked, "give a much better view
Than geraniums (red) and delphiniums (blue)."

They took out their spades and they dug up the bed
Of delphiniums (blue) and geraniums (red),
And they planted chrysanthemums (yellow and white).
"And now," said the Doctor, "we'll soon have you right."

The Dormouse looked out, and he said with a sigh:
"I suppose all these people know better than I.
It was silly, perhaps, but I did like the view
Of geraniums (red) and delphiniums (blue)."

The Doctor came round and examined his chest,
And ordered him Nourishment, Tonics, and Rest.
"How very effective," he said, as he shook
The thermometer, "all these chrysanthemums look!"

The Dormouse turned over to shut out the sight
Of the endless chrysanthemums (yellow and white).
"How lovely," he thought, "to be back in a bed
Of delphiniums (blue) and geraniums (red)."

The Doctor said, "Tut! It's another attack!"
And ordered him Milk and Massage-of-the-back,
And Freedom-from-worry and Drives-in-a-car,
And murmured, "How sweet your chrysanthemums are!"

The Dormouse lay there with his paws to his eyes,
And imagined himself such a pleasant surprise:
"I'll pretend the chrysanthemums turn to a bed
Of delphiniums (blue) and geraniums (red)!"

The Doctor next morning was rubbing his hands,
And saying, "There's nobody quite understands
These cases as I do! The cure has begun!
How fresh the chrysanthemums look in the sun!"

The Dormouse lay happy, his eyes were so tight
He could see no chrysanthemums, yellow or white.
And all that he felt at the back of his head
Were delphiniums (blue) and geraniums (red).

And that is the reason (Aunt Emily said)
If a Dormouse gets in a chrysanthemum bed,
You will find (so Aunt Emily says) that he lies
Fast asleep on his front with his paws to his eyes.


I thought it was time for something delightful and child-like. A nice poem to read aloud to young children if they are home sick from school. 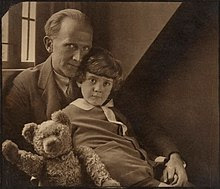 For more about the life of A.A. Milne, see:

Labels: beloved children's author, Eeyore, Piglet, poem: "The Dormouse and the Doctor", poet A. A. Milne, Winnie the Pooh

So early it's still almost dark out.
I'm near the window with coffee,
and the usual early morning stuff
that passes for thought.

When I see the boy and his friend
walking up the road
to deliver the newspaper.

They wear caps and sweaters,
and one boy has a bag over his shoulder.
They are so happy
they aren't saying anything, these boys.

I think if they could, they would take
each other's arm.
It's early in the morning,
and they are doing this thing together.

They come on, slowly.
The sky is taking on light,
though the moon still hangs pale over the water.

Such beauty that for a minute
death and ambition, even love,
doesn't enter into this.

Happiness. It comes on
unexpectedly. And goes beyond, really,
any early morning talk about it.

I'm a big Carver fan, both of his poems and his short stories. He had a really unique knack of getting right to the heart of things, simply, directly and achingly beautifully. This poem captures the fleeting and ephemeral nature of happiness perfectly I think. 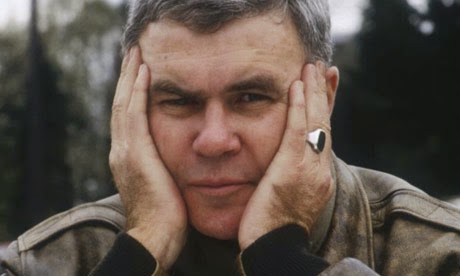 
When the Master was calling the roll
At the primary school in Collegelands,
You were meant to call back Anseo
And raise your hand
As your name occurred.
Anseo, meaning here, here and now,
All present and correct,
Was the first word of Irish I spoke.
The last name on the ledger
Belonged to Joseph Mary Plunkett Ward
And was followed, as often as not,
By silence, knowing looks,
A nod and a wink, the Master's droll
'And where's our little Ward-of-court?'

I remember the first time he came back
The Master had sent him out
Along the hedges
To weigh up for himself and cut
A stick with which he would be beaten.
After a while, nothing was spoken;
He would arrive as a matter of course
With an ash-plant, a salley-rod.
Or, finally, the hazel-wand
He had whittled down to a whip-lash,
Its twist of red and yellow lacquers
Sanded and polished,
And altogether so delicately wrought
That he had engraved his initials on it.

I last met Joseph Mary Plunkett Ward
In a pub just over the Irish border.
He was living in the open,
In a secret camp
On the other side of the mountain.
He was fighting for Ireland,
Making things happen.
And he told me, Joe Ward,
Of how he had risen through the ranks
To Quartermaster, Commandant:
How every morning at parade
His volunteers would call back Anseo
And raise their hands
As their names occurred.

by Paul Muldoon
Posted by Ben Hur at 00:01 No comments: