Down lines of pine and eglantine
Serpentine in my falling
I touch the woodbines and the vines
Mellifluously calling.

Calling on links of ripply winks
To ocean anemone
On silver kinks that pass through chinks
Of mountain chalcedony.

On stones of silver tones I ring
Make music of the mountain
Intonating notations fine
To make his sonant fountains.

I linger as a singer
Gingerly in my saree
Of silver threads and leap adown
Singing my charivari.

I wobble on my ripples
In which the sunbeams dabble
I double as I babble on
And on the pebbles babble.

I rally all my ripples
And make a sparkling sally
And dally down to daffodils
Into a dappled valley.

My silver bells a-jingle
Mingle upon the shingles
I jangle as a wrangle on
Illuming little ingles.

I titter as I glitter
Beneath the blossom's twitter
I fritter fairy jewels
Borne on my silver litter.

By pleasant haunts of pheasants
And rainbow wings aflutter;
By peewit-haunted woodlands
I spurt, I race, I sputter.

I wander, wander as I run
Meandering in meshes
I squander all my music
Philandering my cresses.

I wield my water chisel
Rounding the angled boulder;
And carve my fretted bank curves
Singing a fairy moulder.

On earth's incline I wind and twine
Upon her pull I scurry;
To find her random wrinkles
Romances in my hurry.

Liquidly skidding scud I down
Love's path divinely fretted
The sunshine on the tears of life
In lovely lays all netted.

I purl and whirl and twirl my kinks
A girl in woodlands merry
I swirl, my silver scarves unfurl,
Curl fairy pearls to ferry.

By kindling briar blooms I flow
Spindling on brindled gravel
I scintillate on diamonds
As down the thorps I travel. 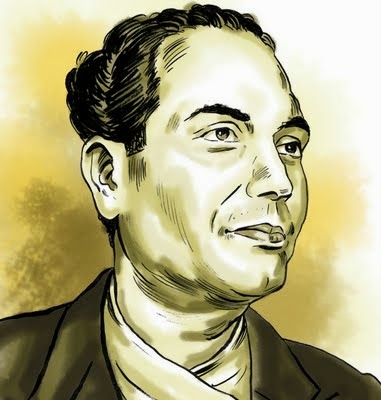 For more about the Nepali poet, Laxmi Prasad Devkota, see:

I'm posting this poem by, arguably, Nepal's greatest poet to honour the memory of all those who have lost their lives in the recent earthquake in Nepal. May they rest in peace.


Bent double, like old beggars under sacks,
knock-kneed, coughing like hags, we cursed through sludge,
till on the haunting flares we turned our backs
and towards our distant rest began to trudge.
Men marched asleep. Many had lost their boots
but limped on, blood-shod. All went lame; all blind;
drunk with fatigue; deaf even to the hoots
of tired, outstripped Five-Nines that dropped behind.

Gas! Gas! Quick, boys! - An ecstasy of fumbling,
fitting the clumsy helmets just in time;
but someone still was yelling out and stumbling
and flound’ring like a man in fire or lime . . .
dim, through the misty panes and thick green light,
as under a green sea, I saw him drowning.

In all my dreams, before my helpless sight,
he plunges at me, guttering, choking, drowning.

If in some smothering dreams you too could pace
behind the wagon that we flung him in,
and watch the white eyes writhing in his face,
his hanging face, like a devil's sick of sin;
if you could hear, at every jolt, the blood
come gargling from the froth-corrupted lungs,
obscene as cancer, bitter as the cud
of vile, incurable sores on innocent tongues,
- my friend, you would not tell with such high zest
to children ardent for some desperate glory,
the old Lie: Dulce et decorum est
pro patria mori. 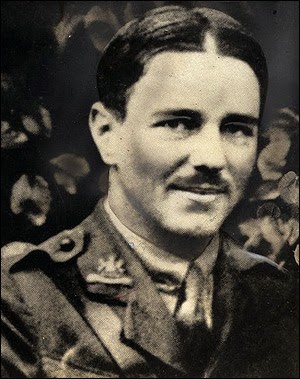 What passing-bells for these who die as cattle?
— Only the monstrous anger of the guns.
Only the stuttering rifles' rapid rattle
Can patter out their hasty orisons.
No mockeries now for them; no prayers nor bells;
Nor any voice of mourning save the choirs,—
The shrill, demented choirs of wailing shells;
And bugles calling for them from sad shires.

What candles may be held to speed them all?
Not in the hands of boys, but in their eyes
Shall shine the holy glimmers of goodbyes.
The pallor of girls' brows shall be their pall;
Their flowers the tenderness of patient minds,
And each slow dusk a drawing-down of blinds. 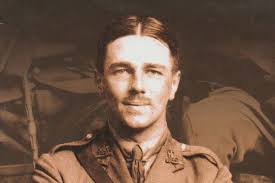 For more information about the poet, Wilfred Owen, see:

Poem: "Every Day" by Ingeborg Bachmann

War is no longer declared,
only continued. The monstrous
has become everyday. The hero
stays away from battle. The weak
have gone to the front.
The uniform of the day is patience,
its medal the pitiful star of hope above the heart.

The medal is awarded
when nothing more happens,
when the artillery falls silent,
when the enemy has grown invisible
and the shadow of eternal armament
covers the sky.

It is awarded
for desertion of the flag,
for bravery in the face of friends,
for the betrayal of unworthy secrets
and the disregard
of every command. 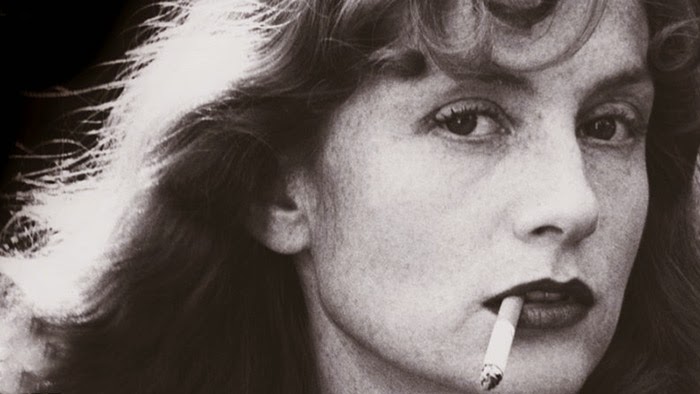 For more on the Austrian poet, Ingeborg Bachmann, see:

Tuesday Poem: "Where are the War Poets?" by Cecil Day-Lewis


They who in folly or mere greed
Enslaved religion, markets, laws,
Borrow our language now and bid
Us to speak up in freedom’s cause.

It is the logic of our times,
No subject for immortal verse –
That we who lived by honest dreams
Defend the bad against the worse.

I'll make no personal comment on this poem. I believe it speaks for itself. 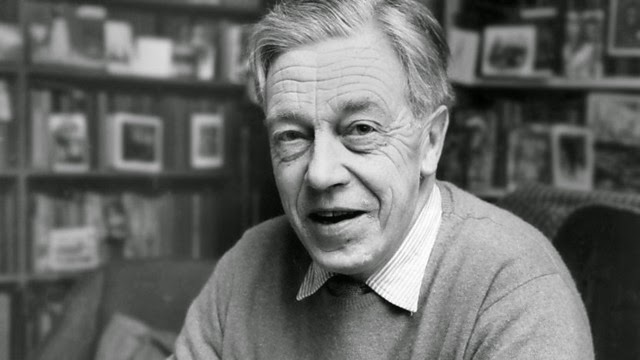 For more information about the poet, Cecil Day-Lewis, see:

Tuesday Poem: "What Must Be Said" by Gunter Grass

Why do I stay silent, conceal for too long
What clearly is and has been
Practiced in war games, at the end of which we as survivors
Are at best footnotes.

It is the alleged right to first strike
That could annihilate the Iranian people--
Enslaved by a loud-mouth
And guided to organized jubilation--
Because in their territory,
It is suspected, a bomb is being built.

Yet why do I forbid myself
To name that other country
In which, for years, even if secretly,
There has been a growing nuclear potential at hand
But beyond control, because no inspection is available?

The universal concealment of these facts,
To which my silence subordinated itself,
I sense as incriminating lies
And force--the punishment is promised
As soon as it is ignored;
The verdict of "anti-Semitism" is familiar.

Now, though, because in my country
Which from time to time has sought and confronted
Its very own crime
That is without compare
In turn on a purely commercial basis, if also
With nimble lips calling it a reparation, declares
A further U-boat should be delivered to Israel,
Whose specialty consists of guiding all-destroying warheads to where the
existence
Of a single atomic bomb is unproven,
But as a fear wishes to be conclusive,
I say what must be said.

Why though have I stayed silent until now?
Because I thought my origin,
Afflicted by a stain never to be expunged
Kept the state of Israel, to which I am bound

And wish to stay bound,
From accepting this fact as pronounced truth.

Why do I say only now,
Aged and with my last ink,
That the nuclear power of Israel endangers
The already fragile world peace?
Because it must be said
What even tomorrow may be too late to say;
Also because we--as Germans burdened enough--
Could be the suppliers to a crime
That is foreseeable, wherefore our complicity
Could not be redeemed through any of the usual excuses.

And granted: I am silent no longer
Because I am tired of the hypocrisy
Of the West; in addition to which it is to be hoped
That this will free many from silence,
That they may prompt the perpetrator of the recognized danger
To renounce violence and
Likewise insist
That an unhindered and permanent control
Of the Israeli nuclear potential
And the Iranian nuclear sites
Be authorized through an international agency
By the governments of both countries.

Only this way are all, the Israelis and Palestinians,
Even more, all people, that in this
Region occupied by mania
Live cheek by jowl among enemies,
And also us, to be helped.

I'm posting this because Gunter Grass died a few days ago on April 13, 2015, in Lubeck, Germany.

I am neither pro or con what he is saying in this poem, but like Voltaire,


I'll defend to the death Gunter Grass's right to say it.

I spent 8 months living and working in Israel in 1987-1988 and, although I'm not Jewish, I sympathise and empathise with their situation. It is hard to lead a so-called normal life when you are constantly alert for attack and surrounded by bitter enemies at every border.

This is a good article written by Heather Horn in The Atlantic shortly after publication of this poem:

http://www.theatlantic.com/international/archive/2012/04/gunter-grasss-controversial-poem-about-israel-iran-and-war-translated/255549/
As Horn says of the poem and her translation, "it is not exactly the prettiest prose in its original German, and the English doesn't read much better."