Pearl Avenue runs past the high-school lot,
Bends with the trolley tracks, and stops, cut off
Before it has a chance to go two blocks,
At Colonel McComsky Plaza. Berth’s Garage
Is on the corner facing west, and there,
Most days, you'll find Flick Webb, who helps Berth out.

Flick stands tall among the idiot pumps—
Five on a side, the old bubble-head style,
Their rubber elbows hanging loose and low.
One’s nostrils are two S’s, and his eyes
An E and O. And one is squat, without
A head at all—more of a football type.

Once Flick played for the high-school team, the Wizards.
He was good: in fact, the best. In ’46
He bucketed three hundred ninety points,
A county record still. The ball loved Flick.
I saw him rack up thirty-eight or forty
In one home game. His hands were like wild birds.

He never learned a trade, he just sells gas,
Checks oil, and changes flats. Once in a while,
As a gag, he dribbles an inner tube,
But most of us remember anyway.
His hands are fine and nervous on the lug wrench.
It makes no difference to the lug wrench, though.

Off work, he hangs around Mae’s Luncheonette.
Grease-gray and kind of coiled, he plays pinball,
Smokes those thin cigars, nurses lemon phosphates.
Flick seldom says a word to Mae, just nods
Beyond her face toward bright applauding tiers
Of Necco Wafers, Nibs, and Juju Beads.

John Updike is probably more well-known for his novels, but he was also a poet. For more about author and poet, John Updike, see:

Our brains ache, in the merciless iced east winds that knive us . . .
Wearied we keep awake because the night is silent . . .
Low drooping flares confuse our memory of the salient . . .
Worried by silence, sentries whisper, curious, nervous,
But nothing happens.

Watching, we hear the mad gusts tugging on the wire,
Like twitching agonies of men among its brambles.
Northward, incessantly, the flickering gunnery rumbles,
Far off, like a dull rumour of some other war.
What are we doing here?

The poignant misery of dawn begins to grow . . .
We only know war lasts, rain soaks, and clouds sag stormy.
Dawn massing in the east her melancholy army
Attacks once more in ranks on shivering ranks of grey,
But nothing happens.

Sudden successive flights of bullets streak the silence.
Less deadly than the air that shudders black with snow,
With sidelong flowing flakes that flock, pause, and renew,
We watch them wandering up and down the wind's nonchalance,
But nothing happens.

Slowly our ghosts drag home: glimpsing the sunk fires, glozed
With crusted dark-red jewels; crickets jingle there;
For hours the innocent mice rejoice: the house is theirs;
Shutters and doors, all closed: on us the doors are closed,—
We turn back to our dying.

Since we believe not otherwise can kind fires burn;
Now ever suns smile true on child, or field, or fruit.
For God's invincible spring our love is made afraid;
Therefore, not loath, we lie out here; therefore were born,
For love of God seems dying.

Tonight, this frost will fasten on this mud and us,
Shrivelling many hands, and puckering foreheads crisp.
The burying-party, picks and shovels in shaking grasp,
Pause over half-known faces. All their eyes are ice,
But nothing happens.

For more information about the poet, Wilfrid Owen, see:


You think it ugly: drawing lines with a knife
Down the backs of those writers we exist to dislike. But it’s life.

One is disadvantaged by illustrious company
Left somehow undivided. Divide it with animosity.

Big fish in a big sea shrink proportionately.
Stake out your territory

With stone walls, steamrollers, venomous spit
From the throat of a luminous nightflower. Gerrymander it.


A bitchy little number showing a less than aspirational or higher purpose for poets and writers.

For more information about the poet, Sinéad Morrissey, see:

What's he that wishes so?
My cousin Westmoreland? No, my fair cousin:
If we are mark'd to die, we are enow
To do our country loss; and if to live,
The fewer men, the greater share of honour.
God's will! I pray thee, wish not one man more.
By Jove, I am not covetous for gold,
Nor care I who doth feed upon my cost;
It yearns me not if men my garments wear;
Such outward things dwell not in my desires:
But if it be a sin to covet honour,
I am the most offending soul alive.
No, faith, my coz, wish not a man from England:
God's peace! I would not lose so great an honour
As one man more, methinks, would share from me
For the best hope I have. O, do not wish one more!
Rather proclaim it, Westmoreland, through my host,
That he which hath no stomach to this fight,
Let him depart; his passport shall be made
And crowns for convoy put into his purse:
We would not die in that man's company
That fears his fellowship to die with us.
This day is called the feast of Crispian:
He that outlives this day, and comes safe home,
Will stand a tip-toe when the day is named,
And rouse him at the name of Crispian.
He that shall live this day, and see old age,
Will yearly on the vigil feast his neighbours,
And say 'To-morrow is Saint Crispian:'
Then will he strip his sleeve and show his scars.
And say 'These wounds I had on Crispin's day.'
Old men forget: yet all shall be forgot,
But he'll remember with advantages
What feats he did that day: then shall our names.
Familiar in his mouth as household words
Harry the king, Bedford and Exeter,
Warwick and Talbot, Salisbury and Gloucester,
Be in their flowing cups freshly remember'd.
This story shall the good man teach his son;
And Crispin Crispian shall ne'er go by,
From this day to the ending of the world,
But we in it shall be remember'd;
We few, we happy few, we band of brothers;
For he to-day that sheds his blood with me
Shall be my brother; be he ne'er so vile,
This day shall gentle his condition:
And gentlemen in England now a-bed
Shall think themselves accursed they were not here,
And hold their manhoods cheap whiles any speaks
That fought with us upon Saint Crispin's day.


It is the 400th Anniversary of the Bard's death this year, so it is only fitting to post one of the most famous and stirring speeches from his great body of work.

Tuesday Poem: "Go and play in the middle" by John Hegley


my Mum used to watch out of the window

I saw John Hegley perform his poems in an early Comedy Festival at BATS Theatre in the mid-1990s. He was very funny. 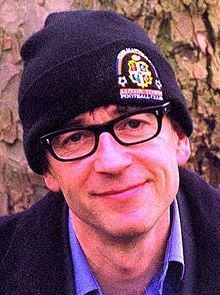