Let's Talk about TJ (with apologies to Lionel Shriver) 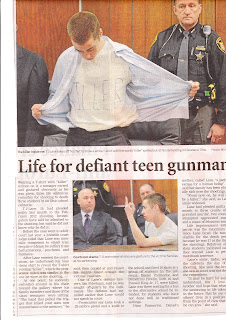 I actually find it incredulous that Americans are fiercely debating gun control with the NRA (National Rifle Association) and the Republican party defending their constitutional right to "bear arms". Maybe when disgruntled Native Americans were circling your wagons (after the whites had broken another one of countless treaties they never honoured - but that's another story) or the British Redcoats were charging your Revolutionary ranks or when Billy the Kid was about to plug you in the saloon you could offer a valid reason for bearing arms, but it is 2013 and no one needs to bear arms unless they have nefarious intent. Seriously, does anyone hunt deer with an assault rifle?

And so the disaffected individuals in American society like TJ Lane (pictured above) keep shooting innocent people. Most often these shooting victims are children or teenagers who will never live to realise their personal potential. Who knows? The discoverer of a cure for cancer could be one of these students gunned down, their lives cruelly and meaninglessly cut short.

How many parents have to be bereaved, how many sisters and brothers, aunts and uncles, grandparents, friends...the connections we make spread far and wide. Remember the wise, wise words of John Donne:

"Each man's death diminishes me,

For I am involved in mankind.
Therefore, send not to know
For whom the bell tolls,
It tolls for thee."

Alas, it seems farcical that any civilised society could squabble over powerful anti-human weaponry while its citizens are being slaughtered by psychopaths like TJ Lane and his ilk, but in the "Land of the Free" it seems that you are free to develop a mental illness or a loner's grudge and go and slaughter innocent people who never did you any harm.

And as American society has grown more urban, technological, disparate in income and social status, and socially more isolating, the number of disaffected potential assassins has grown exponentially it would seem.

Anyone with a shred of decency and morality would recoil in disgust at what TJ Lane is quoted as saying in the article above: "The hand that pulled the trigger that killed your sons now masturbates to the memory" as he gave a defiant finger to the grieving family members in court.

America, now is the time to come to your senses! Gun control is really gun out-of-control in the Home of the Brave and the terminally terrified.

If you haven't read We Need to Talk About Kevin by Lionel Shriver, you should. In fact, every politician in the USA should be made to read it before they debate gun control.

The poet wakes early, anticipation snapping like a trap.

Dew stowaways ride the reader’s slippers as he retrieves his newspaper.

The poet, possibility-charged, brisks to the dairy.

Coffee percolates while the reader casually unwraps the plastic.

In the dairy, the poet is poised like an expectant parent.

The reader disgorges the inserts and swoops on the cartoons.

The poet opens the section to look for the birthmark.

Breakfast arrayed, the reader opens the broadsheet with a satisfied crackle.

The reader chews the poem with her bacon, spitting out the rind.

The poet’s labour continues for another week.


POET'S NOTE: Today, Thursday March 21, is the UN-designated World Poetry Day. I thought this poem about the poet/reader dichotomy seemed appropriate. We live in hope of showing off our "babies" to an adoring public, but we have to bow down to literature's midwife, the editor. Just as long as that "midwife" doesn't make us drive to the hospital with our frightened mother when we can't detect a heartbeat.

POET'S NOTE: Something a wee bit different this week. I think there is a name for this form of poetry, but more erudite readers than I will tell you what it is. Just playing with words is what I call it. Never lose your sense of play. If you do, you'll become an "adult" and we wouldn't wish that on anybody.
Posted by Ben Hur at 12:06 4 comments:


Picture Clint’s flinty-eyed stare
as he squints into the harsh sun
down an abandoned street.
Ears attuned for the chink-clink of the villain’s spurs
hear only the eerie moan of the nor’wester.

Silt swirling in small twisters is
flung like an insult into Clint’s eyes,
the grey, turgid liquid that spewed forth
now desiccated by the unforgiving Canterbury sun.
Cue tumbleweeds,
but the sole arrival is a family carload
seeking the solace of the state-sanctioned sea.
Dad winces as he drives through Dodge City,
and his suspension surrenders to another pothole.

Dusty venetian blinds are
closed like the eyes of the dead,
the blanched grass clutches at the windows,
and weeds suffocate once proud gardens,
fissures scar the lawn
with the earth’s vengeance.

Clint springs like a cougar at
a shadow in his peripheral vision,
but the villain is already out of range,
running carelessly towards a life full of promise.

"The impostor syndrome, sometimes called impostor phenomenon or fraud syndrome, is a psychological phenomenon in which people are unable to internalize their accomplishments. Despite external evidence of their competence, those with the syndrome remain convinced that they are frauds and do not deserve the success they have achieved. Proof of success is dismissed as luck, timing, or as a result of deceiving others into thinking they are more intelligent and competent than they believe themselves to be."


I was talking with a woman I know recently and she was telling me about reading a biography of a famous actor, star of stage and screen, who suffered from "impostor syndrome". Despite his many awards and successes, he believed that one day he would be unmasked as a fraud who perpetrated some great scam on the public and critics alike.

Well, this got me thinking about the tightrope many walk in the various fields of creative endeavour.

In my general day-to-day life, I feel relatively confident that I manage alright as a husband, father, employee and general all round human being. But when I venture into creative waters, such as writing and acting, I am often plagued with self doubt. Despite a modest amount of success in both creative pursuits, I am often convinced that just because I love writing and acting doesn't mean that I'm any good at either.

But is it, as most of us suspect, self-sabotage, a dirty trick played on us by our minds?

STRAW POLL: Feel free to share in the Comments your thoughts on Impostor Syndrome and, if you are feeling bold, do you also suffer from self-doubt in your creative career?
Posted by Ben Hur at 10:54 4 comments:


Millions of us will never blaze
a trail of fame or infamy
or carve our names irrevocably
in the tree of civilisation,
but the surprise of the small stone
is how far the ripples can reach.

Say what you will
of your killers and kings,
your movie stars and moguls
who leave this world
on a comet of newsprint.
I would rather mourn for those men and women
who go home each evening and
kiss their loved ones goodnight.
Posted by Ben Hur at 00:30 3 comments: