It is not strictly a poem, but I think this is a beautiful song with a Christmas theme. It also features the beautiful, gifted and late lamented Kirsty MacColl who was tragically killed, aged 41, on the 18 December 2000 at Cozumel, Mexico. The Mexican millionaire, Guillermo Gonzalez Nova, widely believed to be driving the powerboat that ran over Kirsty and killed her, never faced any consequences in a travesty of natural justice. Kirsty's mother campaigned for many years for justice for Kirsty, but finally gave up, aged and exhausted by the fight.

It was Christmas Eve babe
In the drunk tank
An old man said to me,
won't see another one
And then he sang a song
The Rare Old Mountain Dew
I turned my face away
And dreamed about you

You were handsome
You were pretty
Queen of New York City
When the band finished playing
They howled out for more
Sinatra was swinging,
All the drunks they were singing
We kissed on a corner
Then danced through the night

You're a bum, you're a punk
You're an old slut on junk
Lying there almost dead on a drip in that bed
You scumbag, you maggot
You cheap lousy faggot
Happy Christmas, your arse
I pray God it's our last

The boys of the NYPD choir
Still singing, "Galway Bay"
And the bells are ringing out
For Christmas day

I could have been someone
Well, so could anyone
You took my dreams from me
When I first found you
I kept them with me, babe
I put them with my own
Can’t make it all alone
I’ve built my dreams around you

The boys of the NYPD choir
Were singing 'Galway Bay'
And the bells were ringing out
For Christmas day.


I eat oatmeal for breakfast.
I make it on the hot plate and put skimmed milk on it.
I eat it alone.
I am aware it is not good to eat oatmeal alone.
Its consistency is such that it is better for your mental health if
somebody eats it with you.
That is why I often think up an imaginary companion to have
breakfast with.
Possibly it is even worse to eat oatmeal with an imaginary companion.
Nevertheless, yesterday morning I ate my oatmeal with John Keats.
Keats said I was right to invite him: due to its glutinous texture, gluey
lumpishness, hint of slime, and unusual willingness to
disintegrate, oatmeal must never be eaten alone.
He said it is perfectly OK, however, to eat it with an imaginary
companion,
and he himself had enjoyed memorable porridges with Edmund
Spenser and John Milton.
He also told me about writing the "Ode to a Nightingale."
He wrote it quickly, he said, on scraps of paper, which he then stuck in
his pocket,
but when he got home he couldn't figure out the order of the
stanzas, and he and a friend spread the papers on a table, and
they made some sense of them, but he isn't sure to this day if
they got it right.
He still wonders about the occasional sense of drift between stanzas,
and the way here and there a line will go into the configuration of a
Moslem at prayer, then raise itself up and peer about, then
lay itself down slightly off the mark, causing the poem to move
forward with God's reckless wobble.
He said someone told him that later in life Wordsworth heard about
the scraps of paper on the table, and tried shuffling some stanzas
of his own, but only made matters worse.
When breakfast was over, John recited "To Autumn."
He recited it slowly, with much feeling, and he articulated the words
lovingly, and his odd accent sounded sweet.
He didn't offer the story of writing "To Autumn," I doubt if there is
much of one.
But he did say the sight of a just-harvested oat field got him started
and two of the lines, "For Summer has o'er-brimmed their clammy
cells" and "Thou watchest the last oozings hours by hours," came
to him while eating oatmeal alone.
I can see him - drawing a spoon through the stuff, gazing into the
glimmering furrows, muttering - and it occurs to me:
maybe there is no sublime, only the shining of the amnion's tatters.
For supper tonight I am going to have a baked potato left over from lunch.
I'm aware that a leftover baked potato can be damp, slippery, and
simultaneously gummy and crumbly,
and therefore I'm going to invite Patrick Kavanagh to join me. 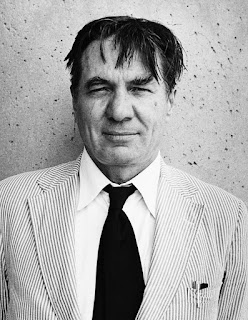 Tuesday Poem: "I Shall Betray Tomorrow" by Marianne Cohn

I need the night to make up my mind.
I need at least one night,
To disown, to abjure, to betray.
To disown my friends,
To abjure bread and wine,
To betray life,
To die.
I shall betray tomorrow, not today. 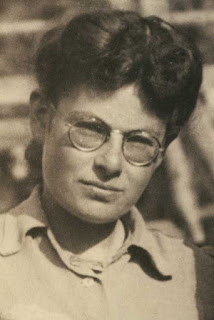 The poet, a 22-year-old French resistance fighter, was beaten to death in a forest by the Gestapo on the night of 8 July, 1944.

Tuesday Poem: "A Curse on My Former Bank Manager" by Adrian Mitchell 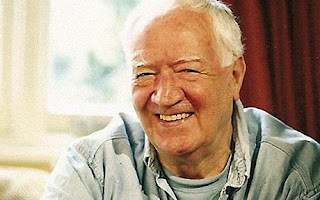 For more information about the poet, Adrian Mitchell, see:

Adrian Mitchell was an outspoken critic of war and social injustice. Here is a video of him reading his anti-Vietnam War poem To Whom It May Concern: