Where the night ends & the pallid day begins
several dirty old groaners lie & stand around
the railway station. One sleeps, a boot under
his head, a plastic shoulder bag clutched to his
belly, his pants half down exposing a white bum...
I sit on a kauri bench & light up a Capstan,
place a boot on my rolled-up sleeping bag
a free hand on top of my canvas pack.
A skinny man with a battered nose drops down
beside me, requests a smoke - his red eyes
unpicking my duffle coat, travelling over my
tennis shoes to the tailor-made cigarette in my hand.
'Non-filter,' I say -
'Better than nothing' his reply.

I light him up & give him half of what's left of
the pack (about five) which he tucks away on the
inside of his overcoat, then runs a hand over
his smooth grey hair - the only tidy part of him.
Two mates stand off talking with another guy:
secret laughs, hands in pockets, knowing nods.
An air of deliberate disjointedness. Last night's
close shave. An agreement to rendezvous
at an early opener later. Nervous like stage-fright
children ill at ease in a moneyed world...
They produce a bottle of sherry, which gets my mate
off the seat like a shot, but they don't want
to give him a drink.

Seems he played up last night, allowed himself
to get done over by the boys - took a lot of shit
on himself. The sight of him turns the others away –
seeing themselves in his snot-smashed face, blubbery
lips & puffy eyes.
They drink the sherry, smiling, rolling back on flat
heels like heroes having come through a horrific night
unscathed.

Another man in a cowboy hat joins them, all belly
&. beard, carrying a guitar. Wears moccasins - long
grey frizzy hair poking out from under the hat's
brim, an intelligent twinkle in the eye.
But when he opens his mouth &, speaks his previous
demeanour changes from something strong & sure
to something weak & gone. His speech practically
unintelligible.
One asks the cowboy where he slept last night & he
somehow conveys 'Here' (at the station). He gets
the poor bastard look...

Suddenly, they take off on separate paths (in case
they're followed) toward the city centre, to meet
up later for tea at an all-night shelter.
My mate with the cigarettes tucked into his chest
waves a gloved hand (but not too revealingly) &
disappears in a swirl of railway grit...
The next time I see him (on Courtney Place) he's
battered more than ever, looking like he's been
rolled. Clothes ripped, hair dishevelled wild pale
eyes, paranoid pallor - charging apologetically
through the clean crowds heading God knows where
from God knows what.

Spare a thought for the homeless and the destitute over this festive season. Christmas is not a time of joy for everyone, sadly.


In the year of centennial splendours

But no one remembered our failures.

The politicians like bubbles from a marsh
Rose to the platform, hanging in every place
Their comfortable platitudes like plush

Without one word of our failures.

If you want to see a selection of pictures from Wellington's celebration of New Zealand's Centenary,  Centennial Coffee House in Lyall Bay is the place to go for a burst of nostalgia and local history.

Lyall Bay, facing south into the Cook Strait, and located beside the Wellington Airport was quite the fairground at the time of the Centenary. 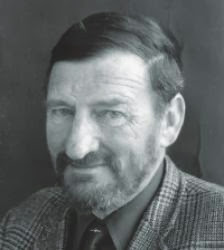 HAVE A LOVELY FUN, RELAXING BOXING DAY WITH YOUR FRIENDS AND FAMILY WITH NO "FAILURES" WHATSOEVER.
Posted by Ben Hur at 00:30 No comments:

Mock up again, summer, the sooty altars
Between the sweltering tides and the tin gardens
All the colours of the stained bow windows
Quick, she’ll be dead on time, the single
Actress shuffling red petals to this music,
Percussive light! So many suns she harbours
And keeps them jigging, her puppet suns,
All over the dead hot calm impure
Blood noon tide of the breathless bay.

-- Are the victims always so beautiful?
Pearls pluck at her, she has tossed her girls
Breast-flowers for keepsakes now she is going
For ever and astray. I see her feet
Slip into the perfect fit the shallows make her
Purposefully, sure as she is the sea
Levels its lucent ruins underfoot
That were sharp dead white shells, that will be sands.
The shallows kiss like knives.

-- Always for this.
They are chosen for their beauty.
Wristiest slaughterman December smooths
The temple bones and parts the grey-blown brows
With humid fingers. It is an ageless wind
That loves with knives, it knows our need, it flows
Justly, simply as water greets the blood,
And woody tumours burst in scarlet spray.
An old man’s blood spills bright as a girl’s
On beaches where the knees of light crash down.
These dying ejaculate their bloom.

-- Can anyone choose
And call it beauty? -- The victims
Are always beautiful.

Nothing says Antipodean summer and Christmas like the blossoming of the Pohutukawa tree. 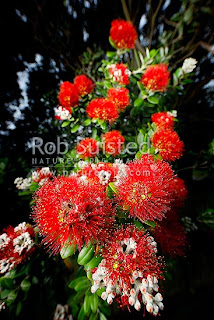 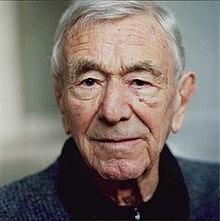 MERRY CHRISTMAS TO MY BLOG READERS, THE FAITHFUL FEW. LOVE AND LIGHT IN THIS HOLIDAY SEASON TO YOU ALL.

Poem: "Poetry is a kind of lying" by Jack Gilbert

Poetry is a kind of lying,
necessarily. To profit the poet
or beauty. But also in
that truth may be told only so.

Those who, admirably, refuse
to falsify (as those who will not
risk pretensions) are excluded
from saying even so much.

Degas said he didn't paint
what he saw, but what
would enable them to see
the thing he had.

The bones of my tupuna*
Safe in secret places up north
Must wait a little longer
Before they claim me for good.
The love of my second parents
Unconditional from the beginning

Unrelenting to the end
Never quite made me theirs.

That tormented paradoxical man
Father of my children
Convinced me we belonged together
But then moved on.
The young ones (our young) he left behind
Claimed my castle as their own

Being themselves a part of me
Always, bone of my bone.

Years earlier, a much younger self
Lay face down in hot dry sand --
Salt on her skin, the smell

Of green flax pungent in the heat,
Summer a korowai
Around bare shoulders --
And felt in her bones
Without knowing why
She belonged to that place.

Nearly a life-time later
On another beach --
the sea
A blinking shield at our feet,
Behind us a dark hill fortress
With sentinel sea birds
Circling and calling --

I lay down beside you in tussock
And felt without warning
I had come home. 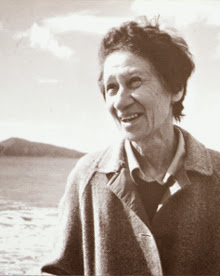 Never build a house to the south, they say.
It's cold. The sun goes north on holiday,
the nights are bitter, even the fleas retreat.

But summer, ah, summer is another time.
The flimsy house is hot enough, the doors
and windows gape to catch a breath of air.

And yet I like this house under the pines.
We have mended the roof, painted the walls, set all
in order. Only the garden will not be tamed.

No manual can coax this stubborn earth
to bloom. Sometimes we blame the pines, and laugh
knowing our lazy ways. The weeds rejoice.

Those who have neglected their gardens due to other life pressures will identify with this poem. My wife and I epitomise the last line: "knowing our lazy ways. The weeds rejoice."

For more about the poet:


It was with some sadness I heard of Nelson Mandela's death. At 95, he had lived a long life, but he had 27 years stolen off him while imprisoned on Robben Island.

Although it is tempting to elevate him to demi-god status, I'm sure he recoiled from any attempts to lionise him, because I believe, at heart, he was a genuinely humble man.

Many years ago I read his autobiography, Long Walk to Freedom, and what always impressed me was his determination not to hate and avenge, but to build a better South Africa, free of that appalling stain on morality, apartheid.

Men like him are unique. Only a few come along in this world with any generation. They make us look inside ourselves and question: are we being the best human beings we can be?

Nelson Mandela would be the first to admit he was a flawed human being like the rest of us, but he strived to be his best, to be noble and courageous and generous and forgiving.

God bless you, Madiba. If there is a heaven, then you are free to run through its veldts like you did as a happy, carefree child in Qunu, the village of your birth. God Speed. We will not see your like again.
Posted by Ben Hur at 10:52 No comments: