When the forensic nurse inspected me, she couldn't
see the tenderness he showed me after. My walk home

squirmed sore with night. I passed the earthwormsdisplaced to sidewalk, their bodies apostrophedin the sun. I did not anticipate a griefso small, my noun of a prayer, Eat dirt to make dirt.Took a man’s hand as he led me to cave. So longas I breathed, I could huff violets in his dank, practiceearth’s gasp. Mother lifts daughter, daughter castslook at camera, a killer, a stick in the mud. I holdmy own hand. When the forensic nurse inspectedme, I described the house, historic blue. Asked meto push my hips down. Little crescent moonswhere his nails stabbed into me. She gave methe word abrasion so gently I offered consent. Blueas the moon when I sighed wait, blue as the no of mythroat. Abrasion, possibly extended form of red.Harm results in a starry night too, many galaxiesscraped under the nail of a heavenly body. Ah mysecond earth, its wounds hardened into swallowedprophylaxis, an injection pooling between muscleand skin. A woke seed. Deadarmed anti-moonsaggregated. A storm can travel seeds up to 30 milesaway. They dust on the sidewalks like lost data.He did not intend Did not. Bloody speculuma telescope searching the angry night sky for proof. 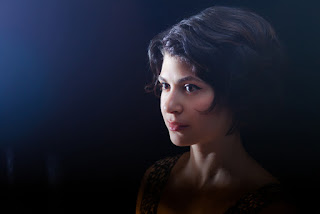 For more information about the poet, Natalie Eilbert, see:

Tuesday Poem: "The Plot Against the Giant" by Wallace Stevens

When this yokel comes maundering,
whetting his hacker,
I shall run before him,
Diffusing the civilest odors
Out of geraniums and unsmelled flowers.
It will check him.

I shall run before him,
Arching cloths besprinkled with colors
As small as fish-eggs.
The threads
Will abash him.

Oh, la…le pauvre!
I shall run before him,
With a curious puffing.
He will bend his ear then.
I shall whisper
Heavenly labials in a world of gutturals.
It will undo him. 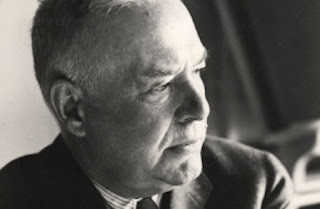 For more information on the poet, Wallace Stevens, see:

Quick on my feet in those Novembers of my loneliness,
I tossed a short pass,
Almost the instant I got the ball, right over the head
Of Barrel Terry before he knocked me cold.

When I woke, I found myself crying out
Latin conjugations, and the new snow falling
At the edge of a green field.

Lemoyne Crone had caught the pass, while I lay
Unconscious and raging
Alone with the fire ghost of Catullus, the contemptuous graces tossing
Garlands and hendecasyllabics over the head
Of Cornelius Nepos the mastodon,
The huge volume.

At the edges of Southeast Asia this afternoon
The quarterbacks and the lines are beginning to fall,
A spring snow,

And terrified young men
Quick on their feet
Lob one another’s skulls across
Wings of strange birds that are burning
Themselves alive. 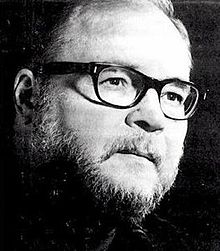 February, peeved at Paris, pours
a gloomy torrent on the pale lessees
of the graveyard next door and a mortal chill
on tenants of the foggy suburbs too.

The tiles afford no comfort to my cat
that cannot keep its mangy body still;
the soul of some old poet haunts the drains
and howls as if a ghost could hate the cold.

A churchbell grieves, a log in the fireplace smokes
and hums falsetto to the clock’s catarrh,
while in a filthy reeking deck of cards

inherited from a dropsical old maid,
the dapper Knave of Hearts and the Queen of Spades
grimly disinter their love affairs.

Souvenirs?
More than if I had lived a thousand years!

No chest of drawers crammed with documents,
love-letters, wedding-invitations, wills,
a lock of someone’s hair rolled up in a deed,
hides so many secrets as my brain.
This branching catacombs, this pyramid
contains more corpses than the potter’s field:
I am a graveyard that the moon abhors,
where long worms like regrets come out to feed
most ravenously on my dearest dead.
I am an old boudoir where a rack of gowns,
perfumed by withered roses, rots to dust;
where only faint pastels and pale Bouchers
inhale the scent of long-unstoppered flasks.

Nothing is slower than the limping days
when under the heavy weather of the years
Boredom, the fruit of glum indifference,
gains the dimension of eternity . . .
Hereafter, mortal clay, you are no more
than a rock encircled by a nameless dread,
an ancient sphinx omitted from the map,
forgotten by the world, and whose fierce moods
sing only to the rays of setting suns.

I’m like the king of a rainy country, rich
but helpless, decrepit though still a young man
who scorns his fawning tutors, wastes his time
on dogs and other animals, and has no fun;
nothing distracts him, neither hawk nor hound
nor subjects starving at the palace gate.
His favorite fool’s obscenities fall flat
—the royal invalid is not amused—
and ladies in waiting for a princely nod
no longer dress indecently enough
to win a smile from this young skeleton.
The bed of state becomes a stately tomb.
The alchemist who brews him gold has failed
to purge the impure substance from his soul,
and baths of blood, Rome’s legacy recalled
by certain barons in their failing days,
are useless to revive this sickly flesh
through which no blood but brackish Lethe seeps.

When skies are low and heavy as a lid
over the mind tormented by disgust,
and hidden in the gloom the sun pours down
on us a daylight dingier than the dark;

when earth becomes a trickling dungeon where
Trust like a bat keeps lunging through the air,
beating tentative wings along the walls
and bumping its head against the rotten beams;

when rain falls straight from unrelenting clouds,
forging the bars of some enormous jail,
and silent hordes of obscene spiders spin
their webs across the basements of our brains;

then all at once the raging bells break loose,
hurling to heaven their awful caterwaul,
like homeless ghosts with no one left to haunt
whimpering their endless grievances.

—And giant hearses, without dirge or drums,
parade at half-step in my soul, where Hope,
defeated, weeps, and the oppressor Dread
plants his black flag on my assenting skull.

by Charles Baudelaire (translated from the French by Richard Howard) 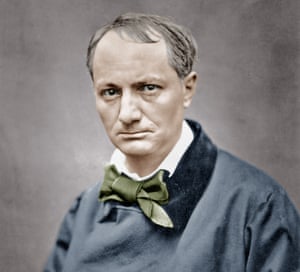 For more information about the poet, Charles Baudelaire, see:

Tuesday Poem: "The Quality of Sprawl" by Les Murray

Sprawl is the qualityof the man who cut down his Rolls-Royceinto a farm utility truck, and sprawlis what the company lacked when it made repeated efforts to buy the vehicle back and repair its image.
Sprawl is doing your farming by aeroplane, roughly,or driving a hitchhiker that extra hundred miles home.It is the rococo of being your own still centre.It is never lighting cigars with ten-dollar notes:that’s idiot ostentation and murder of starving people.Nor can it be bought with the ash of million-dollar deeds.
Sprawl lengthens the legs; it trains greyhounds on liver and beer.Sprawl almost never says Why not? With palms comically raisednor can it be dressed for, not even in running shoes wornwith mink and a nose ring. That is Society. That’s Style.Sprawl is more like the thirteenth banana in a dozenor anyway the fourteenth.
Sprawl is Hank Stamper in Never Give an Inchbisecting an obstructive official’s desk with a chainsaw.Not harming the official. Sprawl is never brutalthough it’s often intransigent. Sprawl is never Simon de Montfortat a town-storming: Kill them all! God will know his own.Knowing the man’s name this was said to might be sprawl.
Sprawl occurs in art. The fifteenth to twenty-firstlines in a sonnet, for example. And in certain paintings;I have sprawl enough to have forgotton which paintings.Turner’s glorious Burning of the Houses of Parliamentcomes to mind, a doubling bannered triumph of sprawl – except, he didn’t fire them.
Sprawl gets up the nose of many kinds of people(every kind that comes in kinds) whose futures don’t include it.some decry it as criminal presumption, silken-robed Pope Alexanderdividing the new world between Spain and Portugal.If he smiled in petto afterwards, perhaps the thing did have sprawl.
Sprawl is really classless, though. It’s John Christopher Frederick Murrayasleep in his neighbours‘ best bed in spurs and oilskinsbut not having thrown up:sprawl is never Calum who, drunk, along the hallways of our House,reinvented the Festoon. Ratherit’s Beatrice Miles going twelve hundred ditto in a taxi,No Lewd Advances, No Hitting Animals, No Speeding,on the proceeds of her two-bob-a-sonnet Shakespeare readings.An image of my country. And would that it were more so.
No, sprawl is full-gloss murals on a council-house wall.Sprawl leans on things. It is loose-limbed in its mind.Reprimanded and dismissedit listens with a grin and one boot up on the railof possibility. It may have to leave the Earth.Being roughly Christian, it scratches the other cheekand thinks it unlikely. Though people have been shot for sprawl.

Leslie Allan Murray AO was an Australian poet, anthologist and critic. His career spanned over 40 years and he published nearly 30 volumes of poetry as well as two verse novels and collections of his prose writings. His poetry won many awards and he is regarded as the leading Australian poet of his generation. The National Trust of Australia named him one of the one hundred Australian Living Treasures.
RIP Leslie Allan Murray. 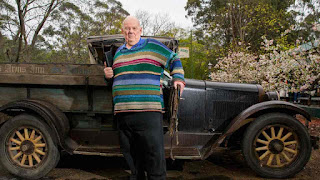